MilktechNZ® showed its strength in innovation and leadership when it won two awards – including being the sole dairy-based business – to feature in the Waikato Chamber of Commerce Business Awards finals last week.

MilktechNZ® won the Innovation award and MilktechNZ®’s owner Gustavo Garza won the coveted Chief Executive Officer (CEO) award amongst a total field of 63 entries across 13 categories. There were 21 finalists, judged by 28 judges, and close to 600 people converged on the Claudelands Event Centre to hear the results and to celebrate Waikato’s resilience post-COVID-19.

Waikato Chamber of Commerce chief executive Don Good confirmed that Waikato was booming, and that it had established itself as an economic powerhouse behind Auckland.

“While international headwinds remain strong, Waikato is in a good place with strong foundations,” he told the audience.

MilktechNZ®’s CR-1 electronic cup removers (ECR) and accessories embody the next generation of milking automation, which are robust, easy to operate, and simple to programme.

In the four years since Gus founded MilktechNZ® its staff numbers have lifted from one to 37, and MilktechNZ® now supplies 22 dealers worldwide, including exporting to Australia, the United Kingdom, and South America.

Gustavo’s connections, reputation, and his “make it happen” attitude have been the underlying momentum for MilktechNZ® jumping its annual turnover by 120% within the last 12 months. Early in 2022 MilktechNZ® established its own in-house marketing agency, OH! Marketing which MilktechNZ® was a finalist in the Marketing award category in these awards. MilktechNZ® acquired a Hamilton metal fabrication business, Press and Lazer, in June 2022 to sure up manufacturing turnaround.

This rapid growth – in a market awash with established multinational names – could have easily gone wrong without inspiring and decisive leadership.

INNOVATION AWARD “SPEAKS TO WHO WE ARE”

Gus said winning the Innovation award was close to his heart, because it spoke to the very essence of MilktechNZ®.

“Innovation absolutely reflects who we are, and what we do, and it was super emotional to win after the long hours we have put in and all the effort that it’s taken to bring the CR-1s to where they are today,” Gus said. “Everything we are doing is centred around innovation. If we were to win one award, that was the one for me. That was amazing.”

He said hearing his name called out as the winner of the CEO award came as a complete shock as he looked at the calibre of the other finalists sitting in the room.

“It was super humbling,” he said. “I couldn’t believe it. Now, more than ever, we will continue doing what we do. For me, much of my satisfaction in this role comes from growing and developing people. That is perhaps the most successful thing I have done in my career. I look at our general manager, Kevin Warner. We started working together 20 years ago out of the production floor and I look at him today as a successful individual in his own right. That’s what excites me.

“I also get so much satisfaction out of seeing people happy. We all have lives outside of work and to spend eight hours a day at work, you need to create an environment that makes people happy to come to work.”

The judges agreed, saying: “Gustavo’s entrepreneurial spirit, his energy and passion for the business he’s created, and the way he spoke of his team was inspiring. He applies his innovative mind and ‘can-do’ attitude to help his team and his customers succeed.

“He sets aspirational goals for his business and high standards for himself and his team, including around values and behaviours. His team are motivated to achieve with him, through the trust and care he shows, and their belief in him, and his vision for the business.”

WHERE TO FROM HERE

Gustavo says their team will savour the awards and use the momentum and acknowledgement to keep them focussed moving forward.

“It was amazing to pause for an evening and to reflect on what our team has collectively achieved to this point.

“But, for me, these awards are a commitment for us to continue to be up front with innovation, and a reminder to keep doing what we do.

“We are grateful to the judges and the sponsors for putting so much time into these awards. They are really important for our region.”

Foster Construction Group was the competition’s premier sponsor with Company-X sponsoring the Innovation award, and the University of Waikato sponsoring the CEO award. 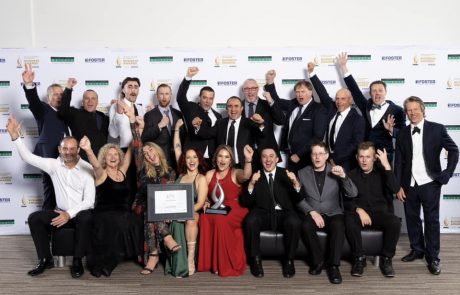 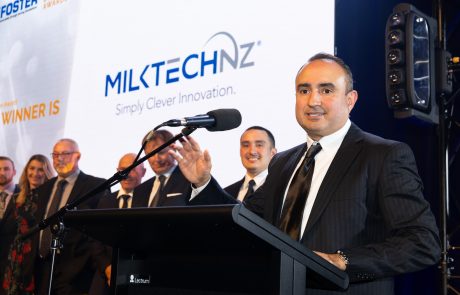 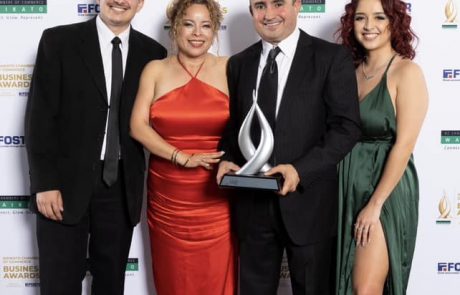